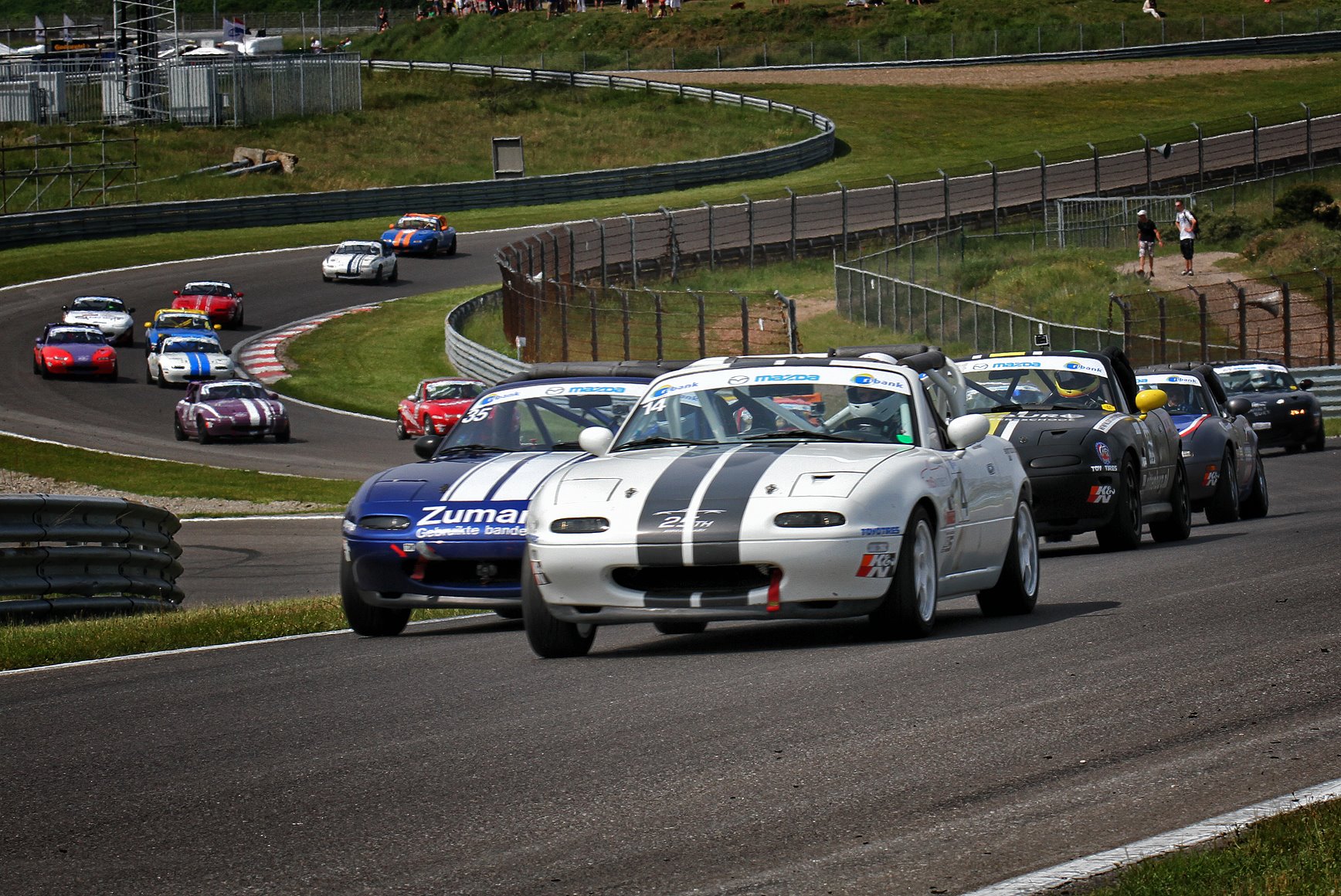 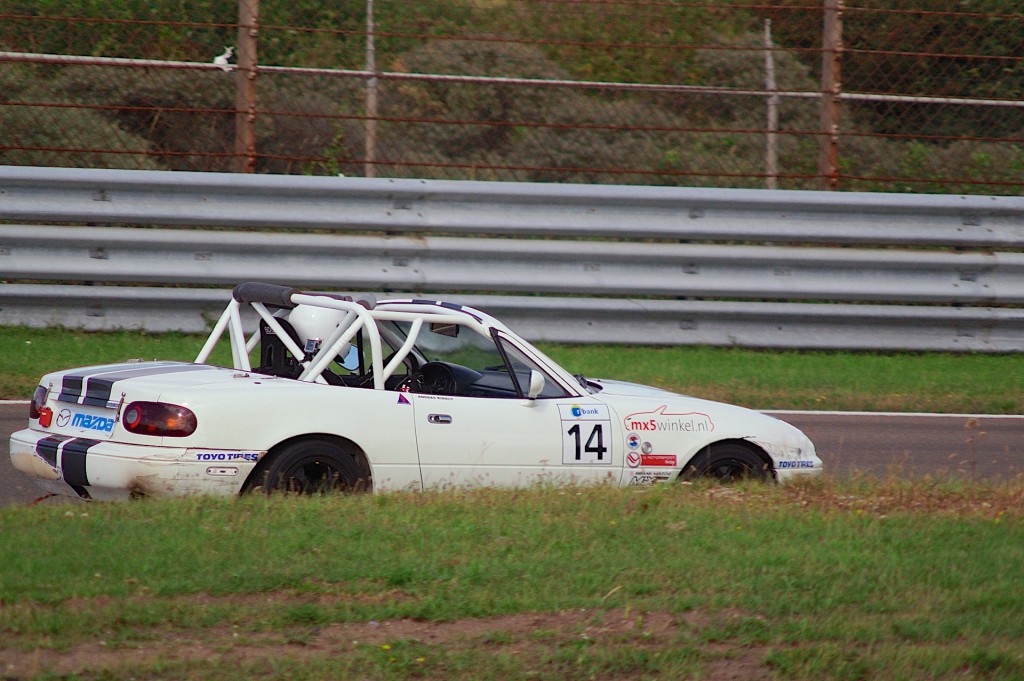 After making some improvements to the car, I started the day with high expectations. During free practice, the track started out half-wet. Given that I only drove in the wet on my first day in the car during the license course, I took it easy. During qualifying, I noticed a huge change in the car handling. The car was much more nervous at corner entry. Especially in the fast corners it was really on-edge with lots of oversteer. After talking to some more experienced drivers it turned out that was partly due to the fact that my tires were brand-new. I knew it was better to have tires that are partly worn, but never expected the impact to be of this magnitude. I also learned that the new tires provide no grip after two laps. My fastest time in qualifying was set in lap 2. I therefore qualified a disappointing 16th.

Shortly after the start of the first race I was sitting behind a car who was leaking fuel in right-hand corners. This was a potentially very slippery situation and it would be best to get past quickly. When executing the overtake, the driver hits me twice from the side. Very weird moment. Especially when looking back at the footage, it is quite ridiculous. If such a thing happens again I will definitely report to the stewards. A touch can happen, but for no reason on a straight in the side of the car is unacceptable. However, in the end I got passed and brought the car home in 15th. 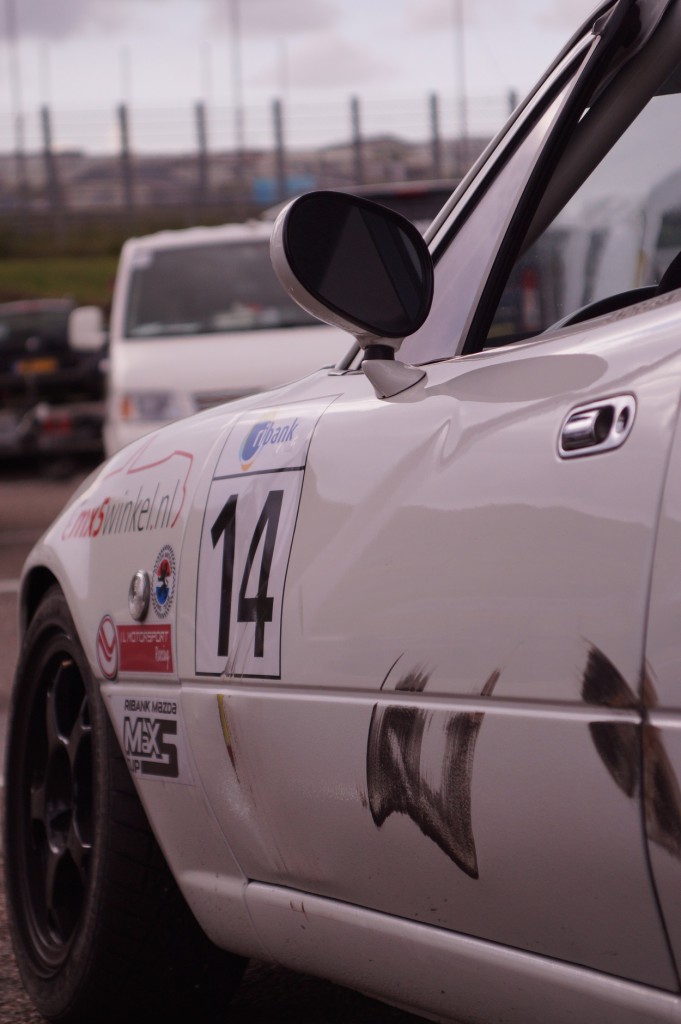 15th was therefore my starting position in race 2. When entering Masters corner in the second lap, mayhem ensued in front of me. One of the IL Motorsport cars oversteered wide and spun. The upcoming traffic had nowhere to go and piled up. The IL car rolls back to the left of the track as I approach. A short rally trip through the grass allowed me to just get passed. Pfew.

The crash issued a neutralization where we should drive no faster than 60kmh to simulate a safety car period. The neutralization was a huge advantage for me. With the fresh tries loosing grip rapidly after two laps on speed, the neutralization allowed me to have the two good laps twice while eliminating several extra laps of performance drop off.

During the restart I was concentrating on the marshal posts to lift up the code-60 flag. I learned from some YouTube video’s that it is hugely important to not get caught napping when the field is released again. While I was reasonably sharp on the restart, the guy two cars in front of me wasn’t. Unfortunately, he dropped right on the ideal line in front of me after being passed, forcing me to lift in the worst spots of all: Kumho corner. Loosing speed the entire straight that followed, the restart had cost me two spots.

Things stabilized a bit until the last lap. My tires dropped off allowing the cars behind to close in. Luckily, the pack in front was fighting it out so I was not losing too much. Going up the hill I was actually gifted a spot when one of my fellow competitors mis-shifted. Later in the lap, one of the Smurfracing cars goes completely sideways in the penultimate corner but has just enough left to finish a tenth of a second in front! I cross the line in 9th.

After the race, the cars in the paddock showed the carnage of the lap 2 crash. Several cars were completely written off. I can consider myself very lucky that I was able to dodge that bullet. Especially since my lack of speed this day meant that I was a few spots behind where I would have been otherwise: right in the pack where the trouble hit. Also, I learned that two frontrunners were disqualified due to their on-track behaviour. This promotes me to 7th spot! Best result of my short real-racing career.

This also meant that I finished 8th overall (on the average of two races). And, in DNRT, 8th overall means a trophy! Despite the trophy itself being an example of explicitly bad taste, I will give it a nice place at home. My teammates Jeroen,  Niels and Tom also stayed out of trouble and especially Tom put in an excellent performance with 7th overall. 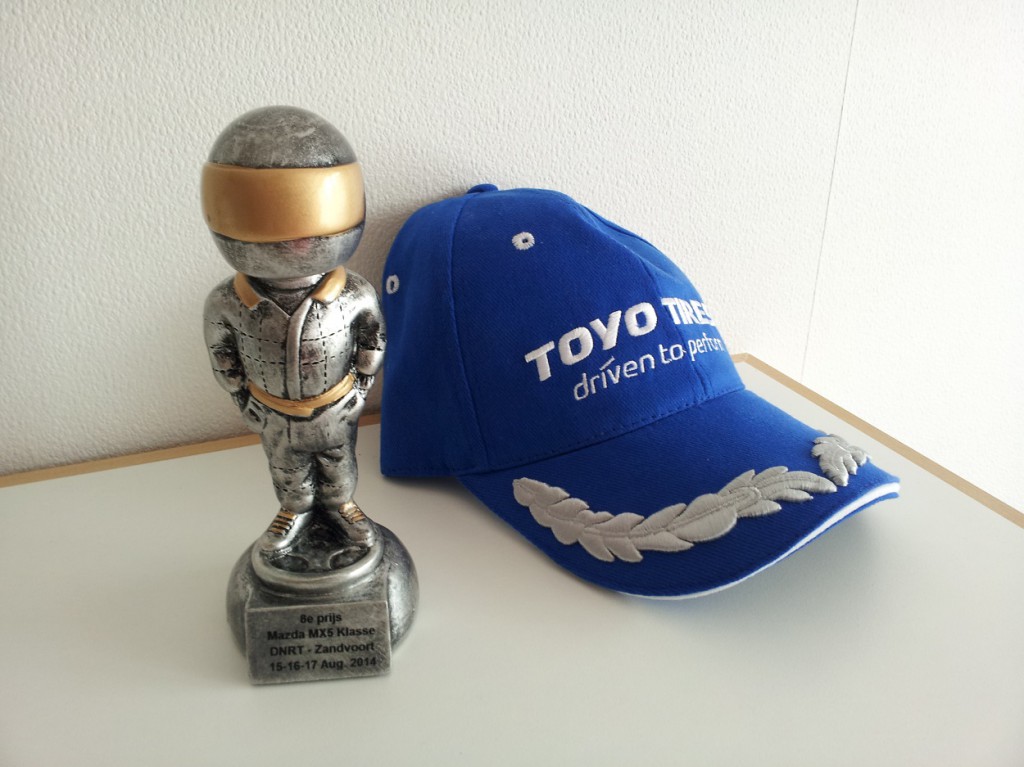 Again I learned a lot form the car and tires. It is funny how a day where I could get no speed in the car whatsoever turned out this good.  Looking forward to the next race on the Assen track, which is new for me. Exiting!

Thanks to Joyce van Balen-Kleine for the photo’s!

One thought on “Dodging Bullets during Super Race Weekend”