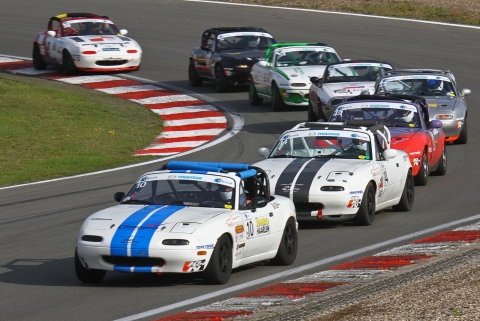 As good season finale should be this one contained plenty of drama. Coming off a good Assen event, the goal for the season finale was to make it three top 10’s in a row.

The morning started off with a wet track. Being inexperienced with the wet conditions, I was learning the behaviour of the car in wet weather. This resulted in a very exciting moment coming out of the Bosuit corner, possibly the quickest of the lap, where I found myself going sideways heading for the barrier. Luckily, I was able to change direction with a quick flick of the wheel while going backwards. Sim racing tricks work in real life – too. Interesting experience is that you really notice how fast you are going when the wind comes into the open cockpit while sliding sideways!

While it had not rained since before the free practice, only halfway through qualifying a dry line started to form. Being on a pretty good lap, I cut the second apex of the Audi chicane pretty aggressively, touching the puddles with my inside wheels. Result: the whole care taking a huge step to the right and a head-on kiss with the tire barriers. I was very happy to see the car only suffered some visual paint damage. Lesson learned on handling puddles on track. Interestingly, the puddles never dried up during the rest of the day, which was bone-dry.

Despite the little excursion in qualifying, I could start 14th out of 31 in the first race. While on the grid, it turned out I forgot my arm restraint. After a quick drive to the paddock and loaning one from a very friendly Volvo driver, I drove to the track entry gate, only to find it closed. By the time I was able to join the track the field was long-gone, resulting in a bunch of training laps and a 29 starting position for race 2.

Race 2 possibly was the most exiting one of the entire year. Starting 29th, I decided on a little more aggressive approach than usual, overtaking no less than 18 cars, before a ultimate attempt to secure 10th spot in the last lap failed miserably, losing 5 places. The onboard footage is absolutely great though!

For race 3 I was somewhere back in my usual midfield position. I finally had a good start, which had not been my strongpoint during the season. A couple of quick laps meant that I could join in on the fight for 7th place. After a couple of position changes, I finally finished 9th, which is very close to the maximum result given my current skills and car performance.

I learned a lot during the season. While having a good understanding of the basics through sim racing, the changing conditions in tires, weather, track and car performance were really new for me. In reality, these factors vary from session to session and quick adaptation is needed. There is no such thing as an ideal setting for one track. With the 2015 season kicking off in April, I will use the winter to evaluate and look into the possibilities for a new season of great racing.