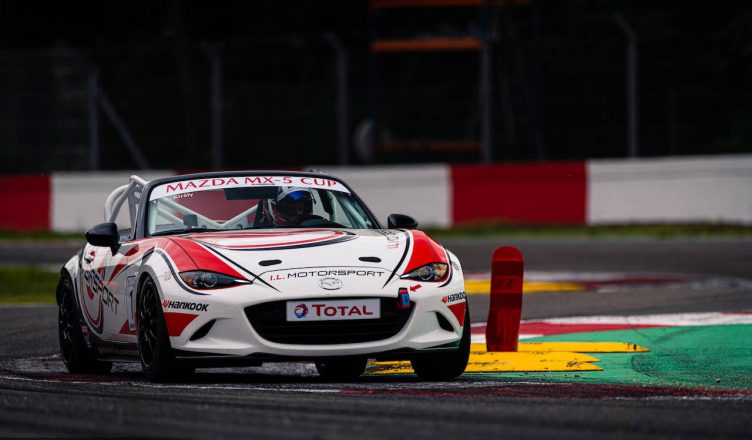 Just two weeks after the start of the season in Zandvoort the team travelled to Zolder in Belgium for round two of the new Mazda MX-5 ND cup. The Zolder track is a very different challenge than Zandvoort, featuring a more start/stop layout opposed to the fast flowy Zandvoort track. Besides being traditionally heavy on the brakes, some very hot weather was predicted, with temperatures set to rise above 30 degrees.

In free practice the team were already encountering a problem. It seemed that every time when driving over a curbstone, the right rear wheel alignment would change, something that would come back later in the weekend.

The speed was in the car for pole position, but with the alignment issue popping up once more it meant András had to settle for second in qualifying. Working with a top 10-reversed grid layout, this would mean a starting from position 9 in the first race on Saturday.

With mechanics Rudy, Hans and Aaron having worked hard to get the car back in shape for race one, András was caught up at the first chicane at the start and from there was on the back foot. Beside the rear right alignment popping out of place immediately again after driving over a curbstone, the hot weather meant that attacking the car in front was virtually impossible due to the engine running hot. Basically this meant that driving close to the car in front would raise engine temps above 110 degrees and into the danger zone. On top of this, the brakes could not cope with the hot temperatures and the heavy braking zones, resulting in brake fade and the pedal bottoming out. András finished 6th.

I.L. Motorsport Racing was not the only team being affected by these issues. In what was a long and exhausting Saturday night the team worked on getting the car back into racing conditions, including a list of technical quick-fixes provided by the race organizers to battle the high engine temperatures.

Although almost impossible, the Sunday race turned out to be even hotter than Saturday one. From the start of the race András settled in second after starting from the same position. Managing the engine temperatures, he could make a move for the lead after a couple of laps! However, being in first position and with a small gap opening up, he miss-shifted from 3rd to 6th instead of 4th gear. Costing valuable time, András had to try to come to the front again from third.

After a two lap safety car neutralization due to an accident elsewhere on track, András was able to retake second with a nice move around the outside of turn one. From there on, it was difficult to attack again due to hot temperatures and again, alignment issues on the right rear.

Finishing second in the second race, the team can look back on a very tough and exhausting weekend with lots of issues. The ND-Cup racer is still a very new car and heading back home, the work will now focus on resolving the technical problems to prevent them from re-occurring again.

The next race will be at Zandvoort on the 13th and 14th of July. Please join us there or on our Facebook, Instagram or youtube pages to stay in touch with all the action!