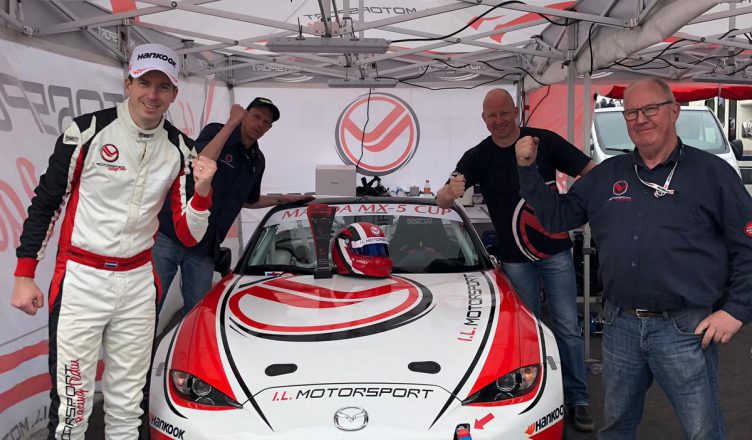 Just days after the announcement of the Formula one grand prix to Zandvoort the I.L. Motorsport Racing Team traveled to Zandvoort for the first round of the MX-5 Cup. Boosted by the big news, more than 100 000 spectators found their way to the track on both Saturday and Sunday.
Being a three day event, free practice and qualifying took place on Friday, race one on Saturday and race two on Sunday.
Free practice and qualifying quickly revealed that the I.L. Motorsport Racing team was very competitive. Being fastest in free practice, András was able to secure pole position in qualifying with a time of 1:56:8, about ten seconds faster than our NA Max5 cup racers!
This new MX-5 cup championship has an interesting set of regulations, most namely a “reversed grid” rule. Here, the fastest 10 drivers from qualifying will start in a reversed order for race one.
Starting from 10th, András was conservative at the start and took the outside line for the first corner. On the inside a driver was surprised by his cold tires and spun. In order to avoid the spinning car, another competitor frantically steered left hitting the I.L. Motorsport Mazda on the rear right wheel. Having taken a hard hit, the car was too damaged to continue. A huge disappointment for the team considering the promising pace. Moreover, as the rear right wheel took the majority of the hit, the team was facing substantial damage repairs.
Working hard the entire day until late in the evening, our team of mechanics (Rudy, Hans and Aaron) were able to fix the damage and be ready for race two!
Starting the Sunday race on pole position as per qualifying result, András dropped back to third position in the first couple of corners “I got passed at the start by the 73 car and then had a slight unbalance going into Scheivlak corner, which cost me another position”. Quickly his focus was to move forward again, as he got back into second place going into Tarzan corner at the start of the second lap. Not settling for second, he then made the pass for the lead the same lap going into the Hans Ernst corner.
Having regained the lead, András was able to drive away from the field, creating a 5 second gap before a safety car was deployed to allow the marshals to clear a car stuck in the gravel. Before the safety car, the win almost looked certain for I.L. Motorsport but this bunched the field right up again, undoing all of that good work.
On the restart, András kept the lead, only to see another safety car come out half a lap later! This time, a major crash involving four cars was the cause. With time running out, the 30 minute race was set to finish behind the safety car.
Crossing the line, the team was then able to celebrate the first win for I.L. Motorsport in the new Mazda MX-5 cup!
“I was able to create a good gap during the race and was ready to bring it home. Then the lead got taken away with the safety car and the fight was back on. Luckily I was able to keep the lead and secure the win!”
The team then enjoyed the podium ceremony and all the fans that wanted to take pictures with the car and driver. The crew also made sure András was kept busy signing autographs!
The I.L. Motorsport racing team fully enjoyed the experience of participating in such a big event and can’t wait to continue the season.
Next races are the first and second of June at Circuit Zolder in Belgium. Please join us for a visit then!