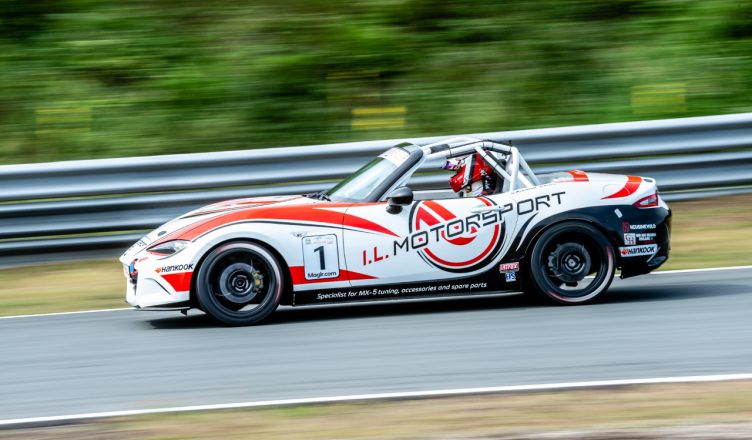 Going in to the weekend, András qualified the MX-5 ND cup car on pole position, which means an extra point for the championship but also starting 10th in race one, which features a reverse grid.

Teams and drivers had to get up early for race one sunday morning and found a wet track waiting for them. András soon found that on a wet but slightly drying track, the ultimate pace was not there. A dramatic ending to the race saw András finish in 13th spot after a last lap incident.

“After the start I made up some positions, but struggeled to advance further. I didnt have the full pace when the track was drying, when there was a short phase of rain midway through the race I could be faster, but then it dried again. In the last lap I pushed too hard to try and close the gap, spun and hit the tire barriers. I could continue, but lost some additional positions.”

This meant work for the team of Rudy, Hans, Aaron and Koen who repaired the car, which included welding the front subframe!

Bring on Race two, starting from the pole position as per qualifying session, András had a great start off the line.
When being challenged for the lead on lap three into the Hans-Ernst corner, András defended the inside but was then hit on the left side. Subsequenly he was passed into tarzan corner fighting a damaged car.

“It was a very weird incident. It seemed that Dominique steered in to the corner like I was not there. The hit was not very hard but somehow did a lot of damage. The steering was bent and an engine mount had snapped so my focus had to be on defending my position rather than challenge for the lead. I thought the car was going to break any moment as in all left hand corners a terrible sound came from the drivetrain!”

After setteling into second place, a late-race safety car brought a new scary moment as the field was bunched up again. Luckily, a backmarker created a gap and the I.L. Motorsport car finished in second!

Team manager Rudy Schilders commented: “After the early morning race it was some hard work to get the car ready for race two, but it was rewarding to get another good result in. The results in the cup are very unpredictable due to many factors which means this championship battle is far from over. We will keep working hard and fight for it during the last 6 races of the season.”

The MX-5 Cup moves to Assen for the next races on the 17th and 18th of August during the Gamma racing days.