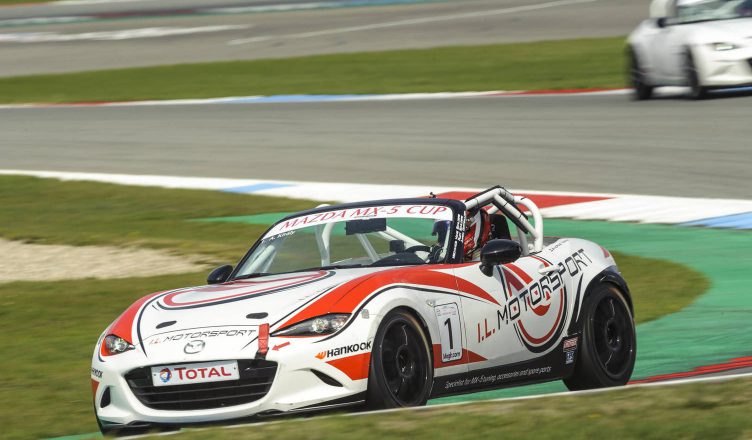 Round four of the MX-5 cup saw the circus travel to Assen for the Gamma Racing Days, a great event where more than 88 000 spectators were expected over the weekend.

Qualifying started off wet, resulting in a lot of slipping and sliding! András got in a good lap, the second time of the session. After the session however we were called to the race secretary, where questions were asked about the rear anti-roll bar. We had disconnected this for the session. Unfortunately the organisation had a different interpretation of the regulation to our own which meant we lost our 2nd place and were dropped 10 positions on the grid for both Saturday and Sunday’s races.

Starting race one from 12th place on the grid, András rocketed to P5 on the first lap. Picking off competitors one-by-one, he eventually settled in 2nd place for some time until the safety car came on track due to a car stranded in the gravel. After the safety car restart, it was a three lap sprint race to the end. Coming into the last lap, the leader made a mistake under pressure and went wide in T1, giving I.L. Motorsport the lead! A small bump in the back coming into the last corner didn’t change the end-result and it was András taking his second race victory of the season!

Celebrations were high as the crew of Rudy, Hans, Aaron and Koen were finally rewarded for all of their hard work. Then, in the middle of the celebrations, the team was notified that another competitor had filed a protest on the technical legality of the car. Again a trip to the race secretary then. This time however, it was a short talk where the protest was rejected.

Sunday, it was again 12th on the grid, and again a rocket start from András. This time he passed 5 cars in the first three corners. Then, going in to the fast right-left chicane at the back of the track, the car in front went for an ambitious pass on the inside, meaning András couldn’t get on the throttle as early as normal. Unfortunately, the car behind didn’t take this into account and hit the rear of the I.L. Motorsport Mazda sending it into another car and eventually the gravel. After this, vibrations in the car were so much that a pitstop was needed and thereby all chances of a good classification were lost.

Looking back at the weekend, it was again full of high and lows. Next up is the legendary track of Spa, where the team will be looking to finally have a trouble free weekend!