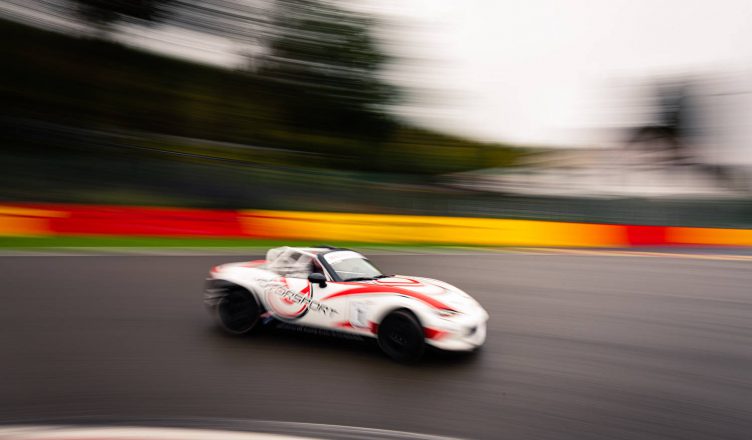 One of motorsport’s sayings is “it will always rain at Spa” and boy it did. Starting free practice on Friday, the track was fully wet. For qualifying, the track showed signs of a drying line. Going out on old rain tires, András first lap was compromised by having to overtake another competitor around the outside of the fast Blanchimont corner. Going into the second lap, the heavens opened again, quickly removing any chance of improving lap time on a soaked circuit. Unfortunately, this means András had to start from P12.

Coming into race one on Saturday morning, it had been raining over night but, the rain had stopped for a few hours. Spotting some dry patches on the track already and anticipating further drying, the team opted for slick tires. As the track would progressively dry up further, slick tires seemed like a viable option when coming from P12 on the grid. Unfortunately however, as the race started the track did not dry up quickly enough. Although laptimes were improving on the slick tires lap upon lap, it was only towards the end of the 30 minute race that the cut over point of the slick tyre delivering faster lap times than it’s wet counterpart materialised. With only a few competitors also opting for slicks, András fell behind the cars on rain tires and was unable to claw back the time lost after the dry tyre started to work. It lead to him finishing a disappointing 19th. It was a hero/zero call and in this case it unfortunately turned out zero.

The team prepared for race two and this time the track was sufficiently dry for slick tires. András made a great start, passing a couple of cars and dodging incidents on the first lap. Then, when coming over the hill after the legendary Eau Rouge corner, a major crash caused the race to be red flagged. A couple cars in front of András, two MX-5 made contact, sending Toine Kreijne into the tire barrier at top speed. Bouncing of the barrier, he was then hit again by upcoming cars. András was able to get around the accident safely. Due to the severity of the incident, the race was not restarted. Team I.L. Motorsport extend our best wishes to Toine for the speediest of recoveries and hope to see you again on track soon!

This incident wraps up what was a disappointing weekend for the team. The speed was good but a few key decisions were just off. Luckily, there is one more event this season, as the team with Rudy, Hans, Aaron and András will give it their all to finish the season with a good result!

The races are October 19th and 20th at Assen. This is also the season finale. Please join us there for the last chance to see the MX-5 cup races in 2019!