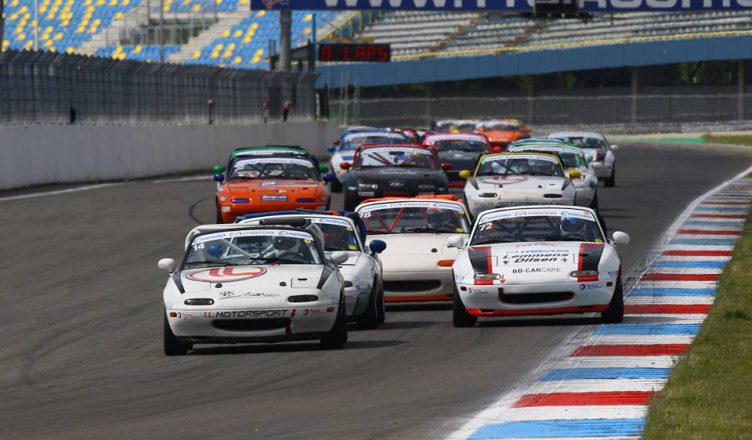 The Max5 cup races at the legendary venue of the TT Circuit Assen in the North of the Netherlands saw some very mixed results for the I.L. Motorsport Racing team.

Rudy Schilders took over the wheel from Chris Woodger to compete in the team championship but struggled with clutch problems throughout the day. With DNF’s in race one and two, the team only needed ten minutes more to prepare the car for race 3. Unfortunately, the start was just missed. A real shame given Rudy’s track record at Assen.

A lot better fortunes in the next garage for the #14 of András Király. Starting in fourth place due to a minor issue that allowed him to only complete two qualifying laps, the car was quickly fixed by mechanic Hans Schilders. For the race András luck quickly changed as he was able to fight his way to the lead by lap three of the first race. A tough battle was fought, resulting in a win for András only 0.094 seconds ahead of the competition. Race two saw a similar picture, winning with 0.146 this time. For the third race András was able to break the slipstream and get away from the field to claim the win despite a code-sixty neutralization mid race. With three wins from three races a great result for András who strengthens his championship lead!

Meanwhile, Polish I.L. driver Artur Turcu was fighting in the pack of cars just behind the leaders. Having missed the Assen race last year due to the birth of his daughter, Artur was getting to grips with the track again taking a tenth and eight place finish in race one and two. However, the third race was his most eventful. When the race restarted, some drivers saw the green flag earlier than others, resulting in a somewhat chaotic restart. The GT chicane at Assen is already a challenge with two cars side-by-side, but trying to negotiate with four cars is certainly a bridge too far. The resulting chaos saw Artur’s good restart efforts nullified. He went on to finish in 12th.

The next race is at our home track of Zandvoort the 24th of June, where the team will be looking to make up lost points for the team championship with Chris Woodger returning in the car.

Keep following the I.L. Motorsport Facebook page for further updates and live coverage during the races. See you at Zandvoort!